Wasp season is well underway now and this nest was treated by our technician Steven just this morning! 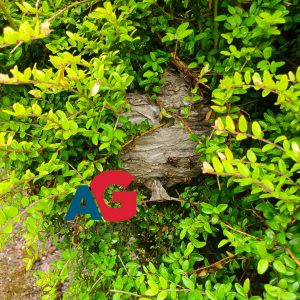 In general wasps are regarded as a nuisance pest and a threat to health. Many people have a genuine phobia, in some cases with good reason. Wasp stings may be unpleasant to most of us, but to some they can prove fatal.

Young queens emerge in the spring, feeding on nectar and sap. They begin to construct their new nest from wasp paper (a mixture of chewed wood, plant debris and saliva).

The first batch of eggs are produced in a few days and larvae develop within the nest. Four to six weeks later, the first generation of workers emerge, they are all female – male wasps emerge later in the season. Workers then take over ongoing nest construction. The queen spends all her time egg laying. By the end of the summer, a nest may house over 20,000 wasps! With the onset of autumn, new males emerge to fertilise new queens who go on to search for hibernation sites. During the winter months, the old queen and workers die and the nest will not be reused. 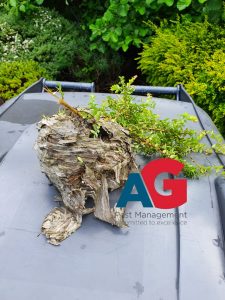 e surest way to treat wasps is by destroying the nest. Ideally nests should be treated early or late in the day when wasp activity is at a minimum and the nest is likely to contain a higher population.

With the risks involved, treatment is always best left to a professional company like AG Pest Management. Contact us on 01226 288844